I (Connie) am part Polish by descent, so I was very excited to visit Poland. Eager to see the sights, I was also excited to try some of the traditional foods my mother has always prepared on special occasions: latkes, or fried potato pancakes; pierogis (dumplings), which most people have had (but maybe not actually from Poland!); and my favorite, kishka, a type of blood sausage.

We spent seven days in this country, and we made each count.

We arrived in Krakow from Vienna on Tuesday, October 23, via RegioJet bus; it was easily the best bus ride we’ve had in Europe, very clean and comfortable, with personal TVs and everything. Our Polish adventures therefore started out on a big positive note. That first day, we arrived at our Airbnb and stayed in for the evening because it was rainy, windy, and cold outside.

The next day, I joined a free walking tour along with a group of guys in a bachelor party. The groom was, to his mortification and his friends’ delight, dressed head to toe as a man-sized penis. This made the tour a bit more unusual than most of the others I’ve been on thus far. He got a ton of attention, with various passersby asking for photos. Besides this bit of added entertainment, we walked all around Krakow’s Old Town, viewing the large fortification at the old city wall; the Wawel Castle in the middle; and at the end, a firing-throwing sculpture of a dragon. Dragons are the city’s symbol, so move over Daenerys — Krakow’s got all the dragons.

I needed a rest after all that walking, so I stopped in at one of the city’s underground café-bars called “Piwnica Pod Baranami” for some tea. It was so cool: old mismatched furniture, vintage posters and pictures on the walls, brick arches and walls, and a generally hip, relaxed vibe. It’s under the Main Square by the old town hall and is one of several such underground establishments in this part of the city. I highly recommend it!

Afterward, I headed to an outdoor market to pick up some of the Polish foodstuffs I mentioned above, which Scott and I ate for dinner (and it was delicious… but my mom still makes better pierogis). 😊

The next day, I went to the Historical Museum of Krakow, which is also under the Main Square. It’s the largest underground museum of its kind, with artifacts found during excavations of the Main Square in early 2000s. It was okay, though not great, but probably would be really good for kids.

After that, I started to walk to the Oskar Schindler Factory, where Scott was planning to meet up with me for a tour; however, I just had to stop in when I saw an “American Nails” salon. I was so excited to get a pedicure as it had been far too long! I wanted to get a manicure, too, but ran out of time.

So, toes looking en flique, I went to meet up with Scott, and we toured the Schindler Factory. I thought the tour would be mostly about the factory itself and specifically what Schindler did to save the Jews who had worked in his factory. However, it ended up being more about the war as a whole and the effect of Nazi occupation on Krakow. We learned that while for many people, Jewish or otherwise, Schindler was a hero and savior, for others, he was one among many Nazis taking advantage of the opportunity to profit from property lost by the Jews under his government’s regime. We assume that’s why the museum doesn’t focus on him as much as we expected: His heroism is uncertain and controversial. Nevertheless, both the museum and the tour were interesting, although the guide went a bit too fast.

Friday was when we had planned to visit Auschwitz, the main reason we had come to Krakow. Seeing this infamous site has been on my bucket list since I first came to Europe in 2003.

Auschwitz was actually a network of concentration camps, with Auschwitz I and Auschwitz II-Birkenau being the two best known. We decided to do a full-day tour of both camps with a group and a guide. The bus ride to the facility took about 90 minutes and brought us to the Auschwitz I camp, originally a military post built for Polish soldiers. According to our guide, it was the “nicer” of the two camps because the housing was solidly built for soldiers; at Birkenau, housing was minimally viable (bare brick walls or even just wooden planks, with no insulation, heating, plumbing, etc.), made for the temporary placement of Jews and other prisoners who were eventually going to be tortured and killed anyway.

At Auschwitz I, we saw several of the buildings’ interiors, the roadways used for daily roll-call, the camp gallows (where the Germans hanged people), and the gas chambers and ovens, as well as the millions of personal items carried into the camp by hopeful Jews thinking they were going to labor camps. These physical artifacts were especially striking, with huge piles of thousands upon thousands of shoes, hair brushes, clothes, suitcases, pots and pans, and literally tons of human hair shorn unwillingly from the Nazis’ victims. To say it was heart-wrenching is a profound understatement. It is hard to fathom the scale at which the Nazis murdered their way throughout Europe.

After Auschwitz proper, we were bused on to Auschwitz II-Birkenau, about 10 or 15 minutes away. This place was even more horrible. We saw the tall, electrified barbed wire fences, the train tracks used to bring humans by the thousands in through the infamous “Death Gate,” and one of the original animal train cars used to transport 80 to 100 victims into the camp (per car) at a time. Many people, especially the old and infirm, died in these train cars, since they were packed in cruelly, without sufficient food or warmth, and with only one single toilet bucket for everyone to share.

Inside the Death Gate, the train track stopped after a few hundred meters in the center of the camp. That way, the ever-efficient Nazis could save time between unloading the people, dead or alive; making selections, i.e., sorting the most physically fit prisoners, who would be worked to death, from those weaker or unhealthier ones who were to be killed immediately; and marching the latter victims to the gas chambers, just down the track another few hundred yards.

My heart is heavy just thinking about it again now. 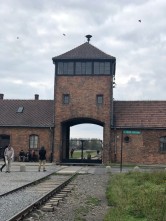 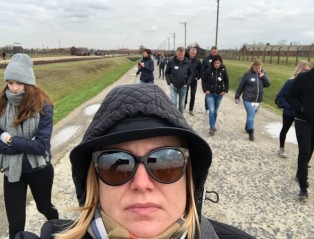 On either side of the tracks stood the male dorms, to the right, and the female dorms to the left, constructed of wood and brick, respectively. We got to walk through one of the brick-walled women’s dorms, and it was awful: dirt-and-gravel floor (and remember, the prisoners had no shoes), wooden planks for beds, and one pitifully inadequate little stove at one end to heat the entire building. Each of these structures would house 700-1000 people at any given time. The worst position was sleeping on or near the floor, where it was coldest, for this is where the death rates were the highest. Each morning, the Jews selected for the “death detail” would go around to each dorm and pick up the bodies of those who had perished (whether from cold, starvation, or illness) the night before.

We also visited the grim remains of the factory used to slaughter people and incinerate their bodies on an industrial scale. As many as 10,000 people were killed in Birkenau every single day. It’s very hard for historians to know the exact numbers of those killed at these camps; even the commander of the camp didn’t know, since the records were either not adequately kept or were destroyed wholly or in part. The best estimate is that 1.3 million people were sent to Auschwitz, and 1.1 million were killed there. To put that into perspective, imagine the entire population of San Diego (with a population of 1.3 million in 2017) being sent to the camp, and only 15 out of every hundred of them surviving. The entire city of Dallas, Texas, also has a population of about 1.3 million.

And here’s the thing: These are just two of the death camps the Nazis created (admittedly two of the largest ones, but still), among hundreds of them.

Yet today there are people in the world who believe, truly believe, that the Holocaust never happened… it’s sickening. If you are one of those people, we urge you to educate yourself and visit some of these memorials. You will be humbled and horrified.

On Saturday, we took a train to Warsaw, the capital of Poland. We accidentally missed our transfer stop, unfortunately, so we had to get on a new train at some small town in the middle of the country. Scott was disappointed because, as a surprise, he had treated us to first class seats for the first time in our entire trip, showing me the tickets just before we boarded. But after the first hour or so, that was all for naught, since we had to get on a new train.

Oh, well, such are the perils of travel!

Sunday was a super-Polish day. We had a big, delicious lunch at a Polish “milk bar” called Bar Bambino. Milk bars came about during the Communist era, serving traditional Polish food at very low prices. Originally, much of the food was milk-based and vegetarian because of the shortage of meat in the country. Anyway, at Bar Bambino, we had latkes, sweet pierogis, pancakes stuffed with fruit, pork schnitzel, and carrots with peas. We were completely stuffed, for only about $10 USD, and loved every bite!

We then walked around the city for a few hours (we had to walk off some of the calories we had consumed!) before touring the Polish Vodka Museum. Vodka is the national drink of Poland. We had a few drinks before the tour and a tasting at the end, so we felt a nice, warm sort of tipsy by the end of it.

After that, we made our way to the Old Town for a delightful piano concert featuring the works of Frédéric Chopin (who, despite the French-seeming name, was from Poland). 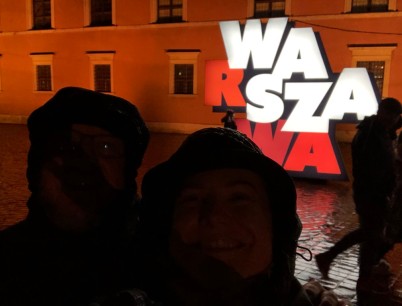 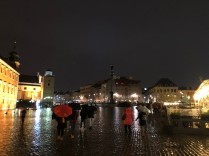 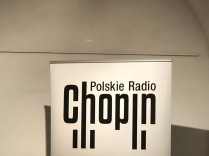 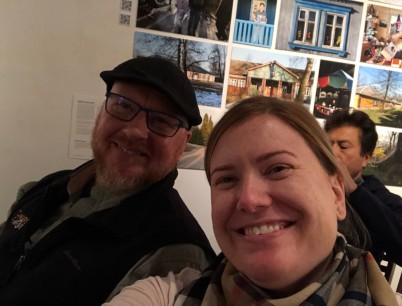 Monday was another cold and rainy day. I spent most of it shopping and walking around the Old Town, which was still very lovely in the rain.

My maternal great-grandmother was born in a village outside of Warsaw, so as I walked through the city, I often wondered if she had ever visited the same streets before she immigrated to the U.S. at the age of five. My mom says I get my thighs from my Polish ancestry, so for that, I thank my great-babcia (babcia means “grandmother” in Polish) and her wonderful genes for these killer legs. 😊